When hiring a reputation management company, don’t you think they should have a great reputation themselves?

We think so. That’s why ICUC works hard to nurture our relationships while adhering to best practices.

But we understand. It’s tricky hiring for such an important service, so we want to help you understand what to look for in a reputation management company, what to ask, and why.

Outsourcing is potentially a huge issue regarding integrity, control, and standards.

We admit it: At ICUC, not all our people are in North America. They are are all around the world – but they’re our our people . And because they’re around the world, we have a 24/7 multilingual workforce of 600 specially-trained employees who are social-listening wizzes and experts at putting out fires.

Our team works exclusively for us, not for some third-party call center in faraway lands, like some of our competitors. They’re outsourced workers not even affiliated with the company you’ve hired. Instead, they’re hired guns contracted at bargain rates.

That’s like asking friends for recommendations about Joe’s Painting Company. You like what you’ve heard, so you set up a meeting. Joe comes over, wows you, gives you a great quote, tells you he’ll make your home sparkle with new colors. But then, three weeks later, Anthony and Bridgette arrive with painting gear in hand and t-shirts that say “A&B Interiors.”

“Yeah, but Joe’s overbooked, and we work cheaper than Joe, so he’s paying us to paint, while keeping a cut for commission.”

But you don’t know anything about Anthony and Bridgette, you didn’t hire them, so why should you trust them? This is the what’s happening with our competitors who outsource their labor needs to budget-friendly places.

The problem with this is you don’t know if those contracted third-parties follow industry standards. Maybe they use an “any means necessary” methodology.

ICUC employees receive in-depth situational training. They know when to escalate matters and when to deal with it then and there. They also understand industry practices and the consequences for failing to adhere to them.

This brings us to the subject of Yelp. 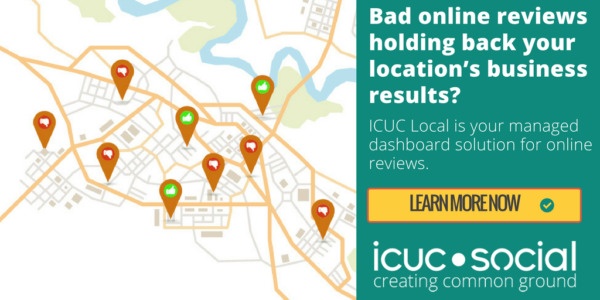 “Can You ‘Remove’ Bad Reviews on Yelp?”

The answer you’re looking for is “no.”

I know, you’re flabbergasted, because you want those bad reviews gone. They’re not fair, they’re bringing down your average. But are they?

The ICUC take on that is “yeah, not really, it’s the hand you’re dealt.” More importantly, removing negative reviews is not allowed. (You can petition for ridiculous reviews to be re-examined. We know these procedures, and the rare occasions when they’re applicable.)

Some of our competitors have gotten into a lot of trouble with Yelp or are banned entirely, and removal of reviews may play a part in that, but there’s another reason they get in trouble: They try to game the system via posting a slew of third-party bulk comments that wallpaper Yelp with “awesome” reviews aimed at swinging the pendulum towards a higher rating.

Again, this isn’t allowed. In fact, Yelp isn’t just cracking down on reputation companies paying to generate these third-party reviews – they’re coming down hard on clients who hire the companies to create these reviews. It’s dishonest, it’s against the rules, and it’s as see-through as a clean window on a sunny day.

That’s why we use bad reviews as they’re intended – as a learning opportunity for you, as well as a chance to prove that you listen and engage with all your customers, not just the ones you like. We wrote about how to manage Yelp bad reviews here.

Per our methods, we engage with negative comments, to make customers feel they’re heard, and where we can, we mediate solutions.

Despite what some business owners think, the paying public expects negative reviews. They distrust places with 100% positive feedback. And, in fact, many think they can tell when a negative review isn’t worth the words it’s written with. Most Yelp users can decide for themselves if “we went there for lunch on Sunday but arrived to find they’re closed Sundays – one star” is a valid complaint. (It’s not.)

“Are You a Yelp Partner?”

They’re likely not. But we are.

ICUC’s proud to be Yelp-certified and a Yelp partner. This doesn’t just mean we’re friendly with Yelp, it means they give us access to algorithms and data that other companies can’t gett. That’s a big deal, it’s data gold.

That’s a lot of information to be without – especially when those details can really change the game on what actions you take based on those reviews.

“Can You Target Specific Regions or Even Specific Stores?”

That Yelp “backdoor pass” comes in super-handy here, along with our other social listening methods, because, yes, we can.

Some of our big reputation management company competitors can’t, but we can, and do.

This is sometimes called “geo-fencing” and is becoming a big player in the marketing world, but we’re all over it already. We can target feedback and reputation fallout with specific regions, cities, countries, or even just designated stores. This can be hugely helpful for all kinds of reasons. A case in point is, if you’re a chain and your scores are falling, we can filter that and see specifically where all that feedback is coming from.

If many of your poor reviews are coming from, say, a southside Boston location, then knowing this means you can take steps to change this. Maybe it’s time for new management. Maybe you can launch a giveaway to boost morale.

The point is, geo-fencing can define the direction you take, but if your reputation management doesn’t offer that, then you’re missing out on giant opportunities to improve your positioning.

“Enough About Me. What About My Competitor?”

We’re glad you asked. We think it’s critical to see how your competitors are ranking. If they’re constantly pacing ahead of you, we can mine their reviews and data to see what their customers are liking. This can be a valuable learning tool for you, and with our Yelp-certified ways, we’ve got a huge amount of data on your competitors too.

Many reputation management companies don’t offer this service, but we wonder what’s the point of knowing your score if you don’t know anyone else’s. That’s like going to the Olympics and competing in gymnastics, scoring an 8.6, and cheering wildly like you’ve won, but there are six athletes placing higher than you. Their scores count too.

We’ll be able to tell you not only what your competitors’ scores are, but also why their customers have rated them so highly.

Your company’s reputation is everything. Without good word of mouth, generating business is a struggle.

We use every trick in the trade to stay on top of who’s saying what and why about your biz, and we know how to use it to your best advantage or to mitigate problems before they grow.

We understand that reputations are a 24/7 business, and that’s why we use human-led algorithms with ICUC-trained experts around the world, and around the clock, so we’re always current with what the word on the web is.

So, let’s talk about how we can manage your reputation. Contact us today.

For brands, the trouble is that Facebook holds all the cards. The social network chooses t

Your brand has negative Yelp reviews? Here’s what to do.

We think Yelp reviews, good and bad, are an opportunity to solidify your brand...

Facebook has been quietly testing a brand new feature